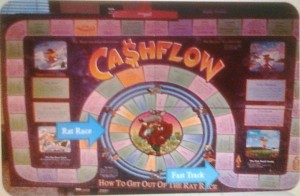 If you are wondering what it’s like playing Robert Kiyosaki’s Cashflow game, I thought I would give you a taste by describing the outcome of each game I play against computer opponents. I have to tell you that sometimes (or OK several times, lol) the computer opponents have beaten me.  It’s not something that I’m particularly proud of, but it just proves that I have to get better by increasing my financial IQ. Even Robert says that “the more you play the game, the richer you’ll become”.  If you are playing Cashflow on a regular basis, I would like you to join me in discussing the following:

My goal is to learn how to get out of the rat race (and stay out of it) by increasing my financial IQ. It is my hope that people will comment and provide feedback about their experiences as well.With feedback and dialogue, we can learn from and help each other. For more info about the game Cashflow, click here

Game One (Using the electronic version with 2 computer opponents)

Winner:  1st place: Police Officer (he was able to get on the fast track and purchase his dream) 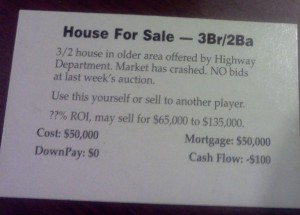 I sold this deal to my opponent because even though the down payment was $0, the cashflow was -$100. At the time I thought that this was a disadvantage because the negative cashflow was taking money out of my pocket. However, my opponent thought that it was a great deal because he accepted my auction price of $800 for it. Less than 10 minutes later, he was able to sell it via a market card for $135,000. The remaining money after the mortgage was paid off enabled him to purchase a big deal and thus enter the fast track.

After the game was over, I realized that both of my opponents used the same strategy: buy property using bank loans and then trading them in when an opportunity arose in the market to sell. The entire game took 25 minutes from start to finish. My goal is to be able to get out of the rat race and get on the fast track to win the game in a short space of time.

I welcome any comments, suggestions, or questions in regards to playing the Cashflow game. Remember Robert’s quote,”The more you play this game, the richer you become”.

4 thoughts on “Lessons I Learned from Playing Cashflow”