Bitcoins, bitcoins, bitcoins—you may or may not have heard this word mentioned in business publications or on television. However, I think that bitcoins may become the currency of the future, and I want to find out as much as possible about what it is and how it works before that happens. If you are also interested, read this post; I will do my best to explain the bitcoin concept as simply as possible.

What is bitcoin? According to Wikipedia, bitcoin is defined as a cryptocurrency and a payment system invented by an unidentified programmer, or group of programmers, under the name of Satoshi Nakamoto. No one knows for sure if Satoshi Nakamoto is a real person or an alias representing a group of persons. Bitcoin was introduced in October 2008 and then released as an open-source software in 2009.  My basic understanding of the bitcoin concept is that bitcoins are traded for goods and services between two parties without any intermediary, such as a bank.  All bitcoin transactions are verified on what is called a network node and then recorded on a public distributed ledger called a blockchain, in which the bitcoin is the unit of account. Since this payment system has no central depository or single administrator, the US Treasury classifies bitcoin as a decentralized virtual currency. You should be aware that bitcoin is one of several cryptocurrencies that are in existence; however it is by far the largest and most popular.  Still confused? Here is a short video explaining what bitcoin is and how it works:

Where Do Bitcoins Come From? How Are They Created?

In order to get a more thorough understanding about bitcoins, I think that it is important to know how they are created, since they are not actual physical coins like nickels or pennies that you can see or touch. Instead, bitcoins are created in cyberspace as a reward in a competition in which users offer their computing power to verify and record bitcoin transactions into the public ledger, or blockchain. The actual activity of verifying and recording these transactions is called mining. The people who do this are called miners and they are rewarded with transaction fees and newly created bitcoins. Users who pay for goods and services with bitcoins have the option to pay transaction fees to the miners in order to expedite the confirmation of their transactions. These transaction fees are much lower (0 to less than 2%) than the fees issued by credit card processors (2-3%).  The following video further explains the bitcoin mining concept:

Setting up a Bitcoin Account–Digital Wallet

Things You Should Know About Bitcoin 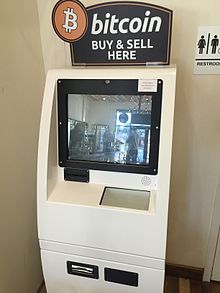 However, bitcoin ATMs differ from regular ATMs in that they are connected to the internet rather than a bank. You just insert cash into the ATM and it will register the corresponding amount of bitcoins you want to purchase. Transaction fees with these ATMs can be high as 7%.

3. Merchants–The number of merchants and companies accepting payments in bitcoin is rising. This may be because the processing fees for bitcoin transactions are typically from 0-2% as opposed to 2-3% for that of credit cards. Currently, companies such as Dell, PayPal, Dish Network accept payments in bitcoin.

I sincerely hope that after reading this post you have a better understanding of what bitcoins are and how they work. Since this is still a relatively new concept to most people, I would highly suggest that you do more research about bitcoins before buying them–if that is what you want to do.  As a parting gift, click here to see a bitcoin “cheat sheet”courtesy from the book [easyazon_link keywords=”Bitcoin for Dummies” locale=”US” tag=”earweaforyouf-20″]Bitcoin for Dummies[/easyazon_link]