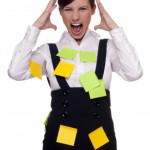 Image courtesy of marcolm at freedigitalphotos.net

In today’s fast-paced and hectic world, it seems as if we are expected to do more and more faster and faster within the same 24 hours in a day.  However, I think we as a society have reached a breaking point with the phenomenon of multitasking. What I mean is some people in general have taken multitasking to a whole new level in that it has permanently altered and/or disrupted lives. What do I mean? Let me give you a few examples…

1. People who walk their dogs, push their babies in a jogger stroller while jogging and listening to music on a cellphone or MP3 player.

For those people who do this on a regular basis, it amazes me that they can do all these things at the same time without much difficulty. However, is it really necessary to do all these things at the same time? How much time are they really saving? Would it be so terrible if they focused on only one or two things instead of all four? I think that multitasking in this fashion does not allow your mind to focus on any one thing; your attention is divided instead. For instance, the dog may want to stop and poop; or the baby may be hungry or needs a diaper change and starts to cry. How can you focus on both the baby and the dog–they both need attention but not in the same way.

2. Talking on the cellphone while using the toilet in the bathroom

This is one of my biggest pet peeves.  Not only because of the obvious sanitary reasons but also because I think it’s just plain rude. No phone call is so important that you just have to stay on the phone while you are using the toilet. I don’t understand why some people think this behavior is perfectly acceptable.  Nobody wants to hear you do your business in the bathroom; I’m quite sure that the person to whom you are talking to will not mind if you either put them on hold or tell them that you will call back.  In addition, how many people have actually ruined their phones by accidentally dropping it into the toilet? This would happen much less often if you are not talking on the phone while using the toilet in the first place.

3. Driving a car while texting 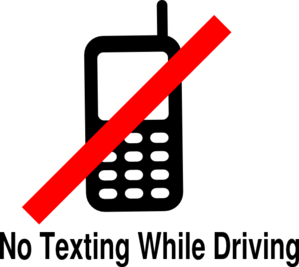 This is a very dangerous example of multitasking.  Many people have been hurt or killed in auto accidents caused by distracted drivers busy sending or reading text messages. The solution to this problem is simple. If you must send or read text messages, don’t do it while driving. Believe it or not, the world will not come to an end because you did not respond to a text message right away because you were busy driving a car. If the other person gets offended because you did not immediately respond to a text , he/she will just have to get over it.

4. Trying to promote more than one affiliate marketing program at the same time.

If you have been involved with affiliate marketing programs, there is always someone who is promoting the latest “bright shiny object” that will be the answer to all your dreams of making money online. That shiny object could be either a new business opportunity, software, or product that is designed to make your life easier as an affiliate marketer. However, the question to ask yourself is will you be more productive by promoting several business opportunities instead of one? I have been guilty of going after several “bright shiny objects” and I have gotten very little or mediocre results. This was due to my lack of focus on any one opportunity. Even Robert Kiyosaki, author of Rich Dad, Poor Dad said that it is better to F.O.C.U.S on one opportunity at a time–Follow One Course Until Successful.

Presently, I am focused on one particular business opportunity that has earned me money at minimal cost. It is also my #1 recommendation for anyone who is interested in learning how to make money online.

5. Multitasking while talking on the phone at the same time. 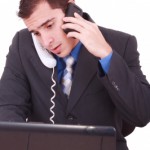 If you are multitasking (like reading emails or watching TV) while someone is talking to you on the phone, then you are really doing a disservice to the other person because you are sending the message that what they are saying is not important enough for you to give your undivided attention. It would be better to tell the other person that now is not a good time to talk; either call them back at a more convenient time or tell them when to call you. Don’t think that the other person cannot tell you are not paying attention; sometimes people have an uncanny knack for finding out that you are not listening to them.

6. Eating breakfast on the train, bus, or car on the way to work

If you do this once on a rare occasion, I do not think it is too bad. However, if you do this on a daily basis, then that is another story.  If you want to eat breakfast, get up earlier so that you have enough time to do so.  Constantly eating on the run may lead to digestive problems. In addition, other commuters may not want to see you eating a doughnut and drinking your coffee or tea.

Multitasking has its purpose. However, I think we as a society need to ask ourselves if we multitask, are we being more productive and saving time? If the answer is yes, then by all means multitask. If the answer is no, then slow down and do what is most important first. Remember the old saying “Rome wasn’t built in a day”. Sometimes multitasking is not always the best way to go.  If you have any questions or comments, please feel free to place them below. I will be most happy to respond.

2 thoughts on “Examples of Multitasking–Are We Really Better Off?”